What Makes a Great Logo?

A logo is to a brand what a crest was to noble medieval families. Even with a basic looking image, logos are a complex visual language that serve two purposes: to tell people who you are, and to act as the first port of call for what you represent.

What's the function of a logo?

The basic premise behind a logo is to provide a quick and easy way to make your brand presence known. Simple, clear text executed correctly can be surprisingly dynamic and memorable as a logo (hopefully, you’ll see ours as both), but will not always be able to capture your essence, so a recognisable symbol should be carefully considered as well. For one obvious example of the necessity of symbolic logos, look at cars. The word ‘Mercedes’ scrawled across a bonnet is going to be much less efficient and much less attractive than the iconic Mercedes star.

Beyond that, a logo – otherwise known as ‘brand mark’ – serves to ensure consistency and build trust across all brand collateral (the tangible aspects of a brand – i.e business cards, advertising). The word ‘brand’ literally derives from the act of branding cows to allow ranches to identify and claim lost livestock. A logo is the stamp of a brand’s identity.

This is why changing an established logo is so inherently risky. If done badly, it can send the wrong signal, dilute brand image, and prompt brand loyals to question, “who are they? What are they becoming?!”.

What are the rules of a good logo?

While there is a strong science behind anything artistic, it’s never a good idea to stick too rigidly to any rulebook. But logos have a practical as well as a creative function. Here are some useful tips to bear in mind when designing your company logo.

The key word here is ‘scalability’. An image full of text, detail, and gradient colour might look beautiful on a company brochure, but it won’t work solo on on a billboard (unless you want to pay vast sums to an illustrator and even vaster sums to your printer), and it definitely won’t translate into small black-and-white iterations for your company pens.

2. A logo should be instantly recognisable.

If it’s not, increasing visibility will prove very difficult, no matter your advertising budget. If it’s too similar to other logos, or too vague to be recognised (i.e. using shapes and lines that don’t form a striking whole), you risk getting confused with and losing business to your competitors. Or worse, you’ll come across as thieving someone else’s logo entirely.

3. Consider recognisability outside of the "lock up".

When designers speak about the ‘lock up’, they mean the grouping of all brand mark elements: logo, company name, and tagline. You’ll need to consider how these will work together, and how they will work apart. Going back to the pen example, you may only have space or print capacity for an image (many smaller things will have very limited print options – sometimes text won’t be possible). When you remove your brand name and tagline from the lock up, the logo must be strong enough to carry your recognisability.

4. Print production isn’t sexy, but it’s a conversation you’ll have to have.

Many brands specify (and even trademark) brand colours – Google ‘2685c pantone’ for a classic example. Because matching a pantone cannot be achieved with digital printing (which is the cheapest and most common printing method), carefully consider how many pantones you’re specifying, and question whether relying on print methods that don’t hit it exactly will affect your brand image.

5. Consider recognisability outside of your brand colours.

On the subject of print capacity, you’re likely to come against some pretty serious colour limitations when branding collateral items (any visual or media to promote your brand). Coffee cup printing is notorious for colour limits – usually you’ll get a maximum of 3 to work with. With aluminium cans, it’s very difficult (and very expensive) to achieve gradient colour. For screen printed merchandise like bags and t-shirts, you’re often charged per colour. Logos should be designed with these limitations in mind.

Bonus tip: If you’re going with an agency to create your brand design, look for one that has an in-house print production manager (sometimes called technical project managers) to advise on the above. Designers will not necessarily be aware of technical print limitations.

What's an example of a good logo?

The strongest and most effective logos are the ones that can convey maximum recognisability with minimal complexity. Think of the McDonald’s logo. It’s “just” a yellow M, but it’s so celebrous and so instantly recognisable, it has its own sobriquet – The Golden Arches. And that’s rare in the logo-world. The Nike tick – when you think about it – is just a tick. But it’s recognised the world over even without the brand name present.

Really clever logos have hidden meanings. Did you know the bite in the Apple logo symbolizes the ‘bytes’ of the computer world? And have you spotted the arrow in the FedEx logo? Ingenuity in design suggests ingenuity in company practices.

What's an example of a not-so-good logo?

There are many people who would tell you the mass fashion rebrand of 2019 produced “bad” logos. Towards the end of 2018, swathes of iconic fashion houses ditched the serifs and the swirls and In a phenomenon known as ‘blanding’. The heritage that defined these antique brands was replaced with bold, simple form, uppercase type that sought to render them more global and contemporary, and reflect a new era of minimalism in fashion. One example was the culling of the Burberry horse – a bold move considering it had reigned supreme for 100 years.

This divisive movement heralded criticism from many, who asserted that loss of detail meant loss of uniqueness, and that all fashion logos now look the same. The counter argument is that the simplification of the logos enabled the true character of the brands, their values, and their products to shine through.

When Volkswagen changed their decades-old logo last year, there was uproar among consumers and in the design community alike, not least because Volkswagen broke its own design guidelines. People love logos so much, they’ll literally plaster them all over their bodies. They get so attached to them that a seachange in branding elements can raise alarm in a brands loyals, and concern that the company is changing beyond recognition, or abandoning them in search of new followers.

I’d like to say quickly that your logo shouldn’t fit strictly within the perspective of what’s “in” right now. You cannot represent a vibrant bon vivant personality by shoehorning your personality into  the latest trend bandwagon.

Relevancy with the times has some benefit. Some practical insight into this here are three key trends to consider throughout your design process:

Making a logo is hard. They come out simple; but a lot of blood, sweat and consideration goes into a truly excellent one (see the top left of this page). In a world where people leave a website in seconds due to the page not loading in 3 seconds, yours needs to stick in people’s memories if you want them hanging around. A logo is what will be emblazoned in people’s hearts and minds when they think of your business, think carefully – what do you want people to think of yours? 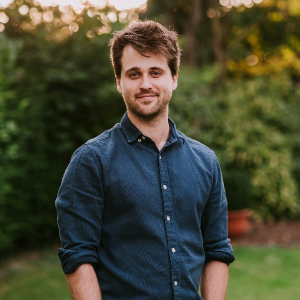 Benjamin Angus
Hi! I'm co-founder of gotiggo.com. I used to work in a job that I liked, but still looked forward to 'clocking out' every day. When it dawned upon me that that wasn't how I wanted to spend most of my life, me and a friend started this website to help out everyone else in the same boat.

Benjamin Angus
Hi! I'm co-founder of gotiggo.com. I used to work in a job that I liked, but still looked forward to 'clocking out' every day. When it dawned upon me that that wasn't how I wanted to spend most of my life, me and a friend started this website to help out everyone else in the same boat.

It’s easy to kid yourself into thinking your marketing efforts are a success, but let key performance indicators show you how you’re really doing.

It’s time to create your marketing campaign & shout about what you’re doing. But how do you get people listening?

You know that you need to market your business, but to who? This blog will take you through the steps that will identify your target market.

A great shortcut to getting your business’s marketing spot on is through competitor analysis. Find out how it’s being done by your successful competitors.

So you know what a brand strategy is – but how do you design one? Learn a few tricks here to supercharge your next brand strategy.

Storytelling in your branding will help win over the hearts and minds of your target audience. Start sharing your story today.

One of these posts might be the key to putting your dreams into action – don’t miss one and subscribe!

Any cookies that may not be particularly necessary for the website to function and is used specifically to collect user personal data via analytics, ads, other embedded contents are termed as non-necessary cookies. It is mandatory to procure user consent prior to running these cookies on your website.

Do you know something about starting a business you wish you had known before? Someone else probably is right now…

Fill in this form with what you’d like to write about, and we’ll be in touch

Welcome to the gang!

We’ve sent you an e-book through the ether to your inbox. PLUS you’ll now receive an e-mail every time we post new content. We love free stuff too.

You can't learn anything from a pop-up

But you can from our interviews with entrepreneurs who’ve experienced the trials of starting up, and blogs that teach the basics of business. Sign up to get the latest!

You can unsubscribe at any time by clicking the link in the footer of our emails. By subscribing you are agreeing to our Privacy Policy.